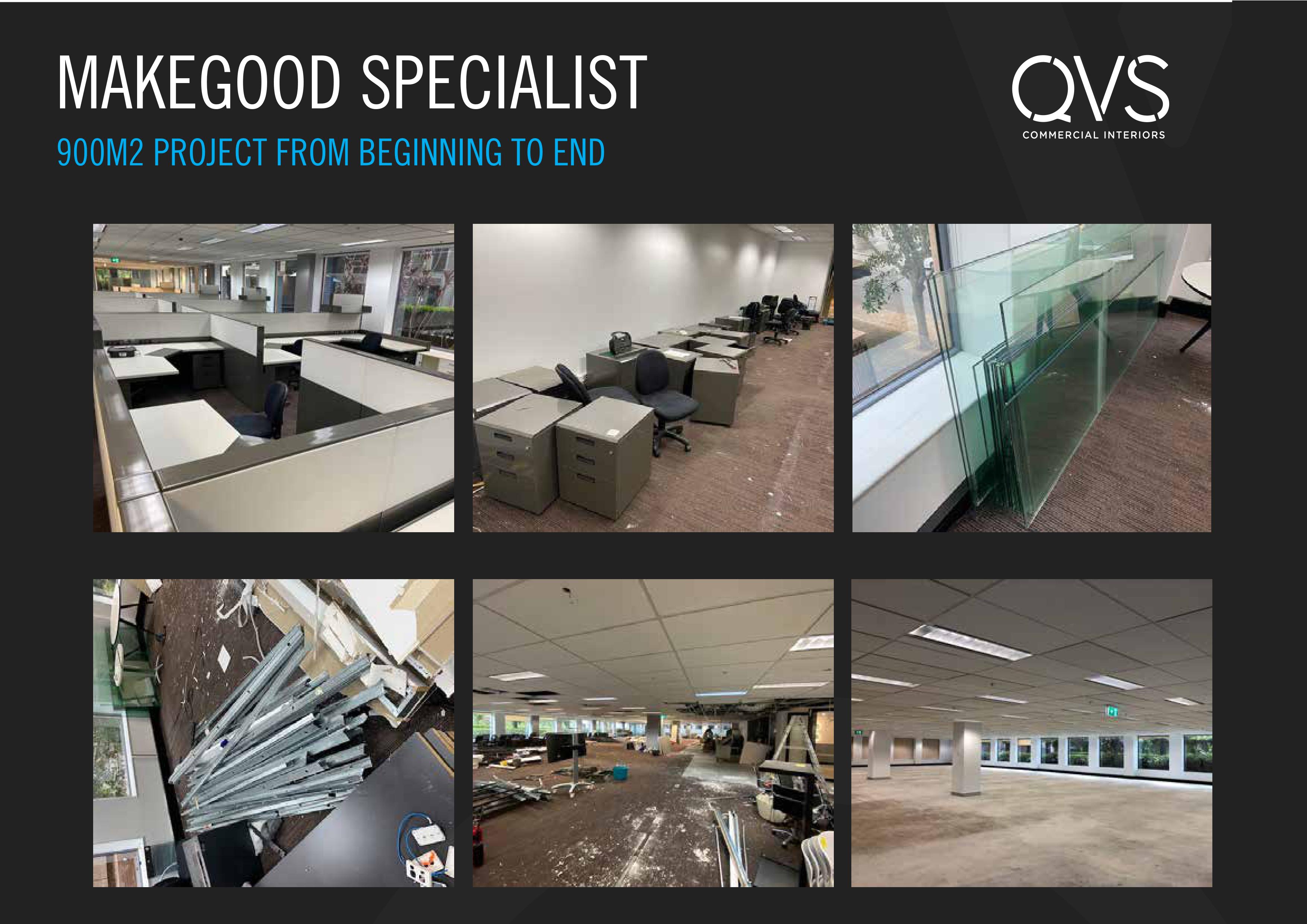 The short lifespan of an office fit-out represents an under-researched waste problem. A 2018 paper reported that out of a total of 9,167 tonnes of demolished fit-outs in Australia, 5,042 tonnes was going to landfill. Given the limited availability of landfill in our cities, especially Sydney, recycling office fit-outs as raw materials and second-hand furniture is the responsible option for any modern organisation. One of our recent projects highlights the issues around recycling and reusing materials when demolishing an office fit-out under a make good clause.

What's Involved in a Make Good?

In February 2020, QVS’s client required a ‘make good’ on a 900sqm office lease in Pyrmont, Sydney. A three-week window of opportunity and a desire to recycle/reuse materials presented QVS with a tight schedule and a challenging process. The purpose of a make good clause in a commercial lease is to guarantee that any infrastructure installed by the tenant will be removed and the premises restored to its original condition at the end of the lease. A typical clause includes:

The cost of a make good is typically between $100 to $500 per square metre but will depend on whether the lease requires replacement of items such as ceiling and floor covering.

The client’s culture of social responsible and sustainable actions called for demolition materials and office furniture to be recycled. This aligned with QVS's sustainability policies and became the backbone of the demolition plan.

Any items that were not sold was dismantled into recycling categories for removal. All proceeds of sales were donated to the client’s charity of choice.

The client bought the business that had taken out the original lease on the tenancy, and so inherited its make good clause.

Even though the client made a few small changes to the original layout, they had not installed the kitchen or reception area. The landlord referred them back to the original make good clause and therefore had to pay to remove it.

QVS recommends that a lawyer always looks over the lease before signing to ensure the make good clauses are as favourable as possible. This is often overlooked by management eager to move into a new space with fit-out – not make good – the major preoccupation.

Legal oversight is particularly important if a clause mandates replacement of false ceilings or floor coverings that are not new. A tenant could argue wear and tear, but if it is written into the lease, the landlord can demand restoration of the original materials.

Timing was tight for this project. QVS could have engaged GraysOnline to run an in-office auction of furniture and fittings, but the timeframe would not allow it. Instead, QVS handled the disposal of items in-house, looking for local sales on Facebook and Gumtree.

The timeframe was a constant pressure, since additional rent and penalties apply if a make good is not performed by the deadline stipulated in the lease. QVS carried on with the demolition leaving office furniture in place as long as possible for potential buyers. Although it took additional care and planning, this process saved tens of thousands of dollars.

Another issue is the lack of interest in used office furniture in Sydney. If businesses had more appetite for second-hand furniture, it would save them large amounts of money. The client had around 90 chairs that cost roughly $500 each new. QVS was selling these for $5 each and even so found it difficult.

Another factor affecting make goods is the rising cost of landfill and recycling in Sydney. Five years ago, it cost QVS an average $250 for a truck to remove a load of waste material. That’s now an average of $600-$650 a load, the increased costs adding up over a large project.

It’s a lot more cost-effective to separate metal, glass and paper recyclables on site, rather than take them to a recycling centre for sorting. However, some demolition companies will not separate materials. Removing steel screws from an aluminium window frame for example takes time, perhaps an extra 20 minutes. On the other hand, aluminium is a valuable commodity.

Recycling during a make good is a question of weighing the returns against labour costs, the timeframe and the importance of recycling to your company.

As a specialist in both fit-outs and make goods, QVS has the experience and resources to provide your company with an aesthetic and practical office fit-out. But we can also plan the best way to dismantle it when that time comes.

If recycling, reusing and ethical disposal of waste materials is important to your organisation, contact QVS for your next office make good.